A great story from Phil Minshull of the IAAF about one of my favorite athletes:

Allen Johnson may have been a late replacement for the United States in the men’s 110 Hurdles at the IAAF World Cup in Athletics but, as substitutes go, it was an inspired choice.

The 1996 Olympic champion and four-time IAAF World Championships gold medallist produced a sparkling run of 12.96 seconds for not only a Cup record but also his best time in nearly a decade. 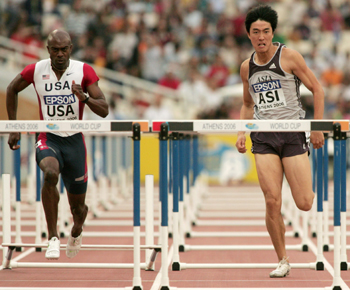 The pre-race predictions all had China’s 2004 Olympic champion and World record holder Liu Xiang and the young Cuban pretender to his throne Dayron Robles battling for the $30,000 cheque that went to each individual winner in the Greek capital but clearly Johnson, whose participation was not confirmed until late Saturday, hadn’t read the script.

“The reason why I am here is that my training partner Lashinda Demus and our coach were here. I was just here training, then Ryan (Wilson) pulled out. The US officials said, ‘Hey Allen, since you are here, will you run?’ I said, ‘sure’,” explained the late guest to what had been expected to be a private party between Liu and Robles.

“Otherwise I would have been just doing some warm weather training and getting ready for the Shanghai meeting next week. But perhaps that’s why I ran so well, because I came out here free and calm.”

“I knew that if I ran my race today then I could win. I wanted to prove the old guy is still there, at least a little bit. I guess I wanted to show everybody that I’m still here and not going anywhere, get them prepared to see me in Osaka next year and then Beijing in 08,” added Johnson with his ever-present smile.

His return to Athens for the first time since 2004 also exorcised some of the ghosts from the Olympic Games two years ago, when he had been billed as one of the medal contenders but ended up sprawling on the track in his heats after getting wrapped around a hurdle.

Johnson’s time, helped by a terrific start, opened the eyes of a few pundits who had previously written off the 35-year-old hurdler, now sporting some flecks of grey in the stubble on his chin, as too old ever to go under the 13-second barrier again.

However, Johnson knew that he could still beat Father Time and his younger rivals. No one older has ever run faster than Johnson did on Sunday.

“I knew how I’d been training and I knew some of the things I’d been working on so the races between Zurich Golden League meeting and the World Athletics Final in Stuttgart (where he finished third) were like practice races for me.

“I don’t mean that in the sense that I was taking them lightly but I was working on a lot of things in those races. I knew that if I got them right, this would be the result at the end of the year,” reflected Johnson.

“When you get the chance to run like this and then go under 13 seconds, well that’s always something special. Now I just want to get the American record back. It seems that I run under 13 seconds more than anyone else does but it seems like when others do it, then they run 12.90. Maybe next week (in Shanghai) will be my chance.”

Johnson was co-holder of the US record at 12.92 seconds, a time he produced twice in 1996, until July when Dominique Arnold ran 12.90 at the Lausanne Grand Prix meeting behind Liu’s World record of 12.88.

One of the key factors to Johnson getting maximum points in Athens was his start but he had also been doing his homework.

“It was a quick gun. I was actually watching the meet on television yesterday and I noticed that the starter caught another guy kinda sleeping a little bit in the blocks so as he said ‘Set’, I told myself ‘you have to be ready at any moment to just take off’. I was a little bit surprised that I actually didn’t see anybody when I got out of my blocks. I thought ‘Here we go’.”

Time has run out for Johnson in one respect. He made a late start to his season due to injury and now has only one more race in his diary.

“My left hamstring was a problem earlier in the year. If you hurt the hamstring on your trail leg side then it’s very troublesome because that’s the hamstring that works the hardest.”

“If I’d been injured on the right side then I could have probably run through it and competed earlier in the year but with the injury on the left side, I just couldn’t go. In fact it still bothers me a little bit; it’s not 100 per cent.“

“But I don’t look at it like the season has come to an end too soon. I just think that now I know how to get things to peak in September.”

“It keeps me fresh, next year the World Championships are going to be in September and then the Olympics are going to be late August,” added Johnson, after finally winning at the World Cup following his second place finishes over the hurdles in 1994 and 2002 and being part of the United States 4x100m relay team that finished second in 1998.
Discuss entry