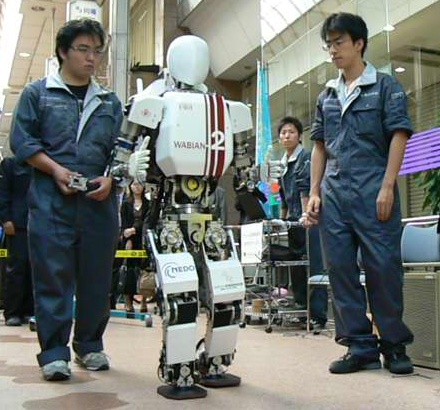 For those of you who are tech geeks like me you may have heard about the recent development in locomotive humanoid robotics today. Researchers in Japan introduced the WABIAN-2R. While humanoid robots have been around for almost 25 years (see Honda's Asimo) the major news is that while the WABIAN-2R has an un-Asafa like top end speed of 1.24 miles per hour it is the first robot to feature a pelvis with a swiveling action, allowing it to walk more like a human, with heel-to-toe strides and full extension of the leg. All of the old robots had very stiff gait patterns and were forced to keep their knees bent at all times to maintain balance. Why is this news on a track and field site? Because pelvic rotation is one of the key components to not only human locomotion but every human movement. Unfortunately the pelvis seems to be among the first areas of the human body to be affected by the largely sedentary lives that most of us live. As we live our cushy lives spending 12-14 hours of our day sitting in a chair typing on a keyboard, watching tv, falling asleep in class, or playing videogames, the muscles surrounding the lumbo-pelvic-hip complex seem to weaken and shorten. This causes what I call 'frozen pelvis' where the pelvis is locked in place and doesn't rotate sufficiently during normal motion / locomotion. While this isn't readily visible when walking it becomes quite clear when the athlete attempts to do sporting movements like sprinting, jumping and throwing. I guess it just struck me as odd that robotics researchers are trying to make robots move more human-like while humans are gradually moving more robot-like.

Focus on the Basics