Here's a nicely written article from the Jamaica Gleener by William Aiken:

The sprinting prowess of African-Americans and Afro-Caribbean people in general and Jamaicans in particular is legendary and is demanding of serious scientific enquiry and research.

The sprinting prowess of African-Americans and Afro-Caribbean people in general and Jamaicans in particular is legendary and is demanding of serious scientific enquiry and research. 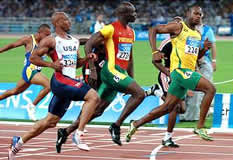 Neither is it a coincidence that in the 2005 World Championships 100-metre men's final, three of the eight finalists were Jamaicans – Michael Frater, Dwight Thomas, and Asafa Powell, while Kim Collins, the defending champion, was from St. Kitts and Nevis, while three others were African-Americans, the latter representing a country over 100 times the population of Jamaica.

Notable Caribbean sprinters include Kim Collins, Hasley Crawford, AtoBolden and Darrel Brown from Trinidad and Tobago, Obadele Thompson fromBarbados, while the sprinting prowess of the Bahamian women is wellknown. The great black (and beautiful) French female sprintersMarie-Jose Perec and Christine Arron are both from the Caribbean FrenchIsland, Guadeloupe, while Bruny Surin a great black Canadian sprinterwas born in Haiti.

While it is clear that good sportadministration, excellent coaching, proper nutrition and adequatefunding and facilities are vital to achieving athletic greatness, inthe absence of raw athletic sprinting ability this will not occur.

I wish to propose a hypothesis that addresses not only the aspect ofJamaica's raw athletic talent, but also encompasses an explanation ofseemingly diverse phenomena as our high incidence of prostate cancer(one study found it to be by far the highest in the world at 304 /100,000 men / year), our high crime rate (murder capital of the worldstatus earlier this year), our high road traffic accident and fatalityrate, and our alleged high levels of promiscuity.

But why should this be? I believe the answer to this lies in the slave ship routes within the Caribbean and the New World.

First, let us assume that all Africans who survived the trek from theAfrican interior to the West African coast and subsequently the middlepassage would have been more or less subject to the same inhumaneconditions which would have produced a severe selection pressure thatenabled only the fittest slaves to survive the journey.

Myhypothesis is that for each incremental increase in the journeytravelled, once the slave ships entered the Caribbean, there was acorresponding selection pressure which ensured that only the fittest ofthe fit slaves survived and furthermore the traits which enabledsurvival were somehow dependent on high levels of responsiveness totestosterone.

Since Jamaica was one of the last stops to be made by the slave shipsit ensured that only the most resilient and fittest of slaves werealive to disembark in Jamaica.

This hypothesis is supported bya number of observations. African-Americans and Afro-Caribbean peopleare represented far more frequently in sprinting events than personsfrom Africa. Even more interesting is that as one goes westward withinthe Caribbean, sprinting prowess becomes more prevalent and reaches itspeak by the time Jamaica and Bahamas are reached.

Thishypothesis in no way minimises the important contributions of goodsport administration, excellent coaching and proper nutrition butrather looks at one aspect of the puzzle in attempting to explain theraw athletic talent that seems to be disproportionately high inJamaicans.

Dr. William Aiken is the head of Urology at theUniversity Hospital of the West Indies and president of the JamaicaUrological Society; email: [email protected]