No luck for J Gat in his post-doping bust tryout for the NFL. Here's an article from the Houston Chronicle by Megan Manfull: 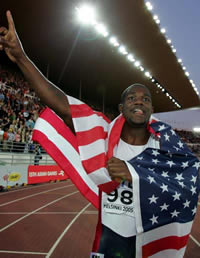 The Texans worked out former Olympic gold medalist Justin Gatlin on Tuesday. Team officials said they have no interest in signing the 24-year-old though.

In April, Gatlin was banned from track and field for eight years because he tested positive for the banned substance testosterone. Now he is looking to start a career in football, despite never having played it in college.

"It's my understanding that he never played football before, but he can run really, really fast," said Texans coach Gary Kubiak, who did not attend the workout. "A lot of teams in the league have worked him out over the course of the past month. From (general manager) Rick (Smith) and I's perspective, he was very impressive.

"I'm sure it would be a very big step for him to all of a sudden step in and start playing football. But it's something he seems interested in."

One of the reasons Kubiak said the Texans aren't interested is because Gatlin, 6-foot-1, 180 pounds, wants to become a receiver in the NFL, an area in which the Texans are solid. Jerome Mathis was added to the 53-man roster Tuesday. He is an All Pro returner and one of the fastest players in the NFL.

The Texans were impressed with Gatlin in the workout, though. His speed stood out the most.

"He did a good job," Kubiak said. "Some of our kids who were over there watching him were amazed at how fast he ran. I don't even know if he was full speed at that time. He did catch the ball pretty good."

What Allowed Tom Brady to Play NFL Until He Was 44

Strength Coach & The Way of the Dinosaur