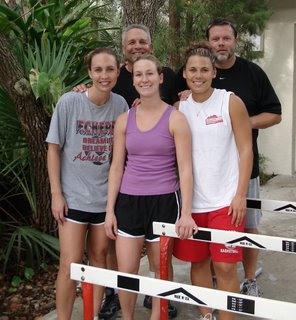 Over the years the Breakfast Club has expanded and contracted as the athletes went away to college, sometimes onto professional sports and others just grew up and got jobs. Yesterday we had a reunion of sorts with some of the breakfast clubbers. The former breakfast clubbers who came back to visit did a 40 minute kick ass ”Burn with Vern” smorgy circuit just for old times sake. The smorgy circuit consists of an upper body exercise, followed by a core exercise, followed by a leg exercise. Each exercise period is thirty seconds followed by a ten second transition to the next exercise. Needless to say this grows on you! The returning breakfast clubbers were one of the originals, my daughter Kristen (left front) who now works for the Houston Dynamo, Sarah Lancaster (middle), a former all state guard at Sarasota High School, now a senior at Florida State, Sara Franco (Right front), the other guard at Sarasota high school, now a senior at Florida Gulf coast University. The two old guys were me and Mike Lane, the Rugby Coach at Eckerd College. The joke was that we would make this an annual post Christmas reunion and they eventually would bring their husbands and children to do a smorgy circuit. For me this is what makes coaching worthwhile. It is great to see the young athletes grow up and have careers and cherish the work and camaraderie that they shared.
Discuss entry

Too Much Flexibility Training?

That Time of Year