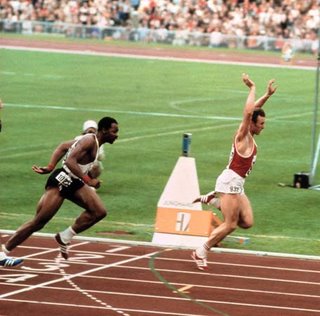 A few weeks ago Joe Pruzulta wrote the following in response to my post on “Visions of Eight.” Give me your thoughts on Borzov please. To me, he never did beat the best (i.e. Steve Williams, Harvey Glance, Houston McTear, Ivory Crockett et al). He was the Olympic Champion at the 100 and 200 meters. We will never know if would have happened if the whole American contingent had made it to the starting line for the 100 meters. Borzov certainly was on top of his game at the Olympics and he clearly beat the best in the 200 meters. I got to see Borzov run once indoors and at the 76 Olympics where he took the bronze in the 100 meters. Technically he was impressive. That was the first time a sprinter had medaled in the 100 meters in two Olympics. Much mythology has arisen around Borzov. He is one of the few male sprinters to come out of the Soviet Union; they had success with females, but not the same success with the males. At age 15, a comparable age to an American high school sophomore or junior, he ran a 10.7 hundred meters. That certainly shows very good potential. He was very well coached by Valetin Petrovsky. He did not run that many meets so he was able to point for the big meets where he usually excelled. In contrast to other Soviet sprinters before him he did not look like a weight lifter. I used to marvel at the Soviet sprinters in the sixties who looked more like weight lifters than sprinters. They were always great for thirty or forty meters and then would fade. It is only speculation but perhaps he was identified young and trained properly as a sprinter with a proper balance instead of an emphasis on max strength. What I have read of his coach makes much sense and was very forward thinking then and quite contemporary today. Mind you this is all my opinion because there continues to be a veil of mystery surrounding Borzov; to my knowledge no western writer has interviewed him. It would be enlightening to see someone do that and find out details of his training and background.
Discuss entry

Has Coach Young Lost His Mind? by Matt Hunter