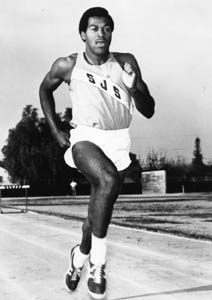 I recently read an interesting article about Jeremy Wariner and his split from Coach Hart. There were some previously undisclosed and interesting tidbits in there about the split if that’s what you’re in to, but the most interesting part of the article was actually a quote from Jeremy’s former Baylor teammate and 2004 Olympic gold medal relay anchor leg. Here’s the excerpt with the quote in question in bold:

“I didn’t do it to save a few dollars, to start off with,” Wariner said. “I did it because I felt like it was time for a change. Coach Ford, my new coach, has the same philosophy as coach Hart. My workouts are exactly the same.”Not true, said Darold Williamson, Wariner’s training partner and a former teammate at Baylor who also cut ties with Hart and hired Ford as his personal coach.
Williamson said Ford’s regimen calls for more sprint work- regular intervals at 100 and 150 meters- which is something Wariner wanted in 2007 despite Hart’s protestations. Wariner continues to toy with the idea of one day competing in the 200 and 400, just like Johnson did.
Hart wanted Wariner to focus exclusively on the 400, and the dynamic between pupil and teacher changed.
“I was always the boss as the coach,” said Mike Nelson, who coached Wariner at Arlington (Texas) Lamar High School. ” … When you get in the pros, he’s your boss because he’s paying you the money. For me that would be a tough situation, to be the coach of a pro athlete.”
Though Williamson said he has not talked to Wariner in detail about the coaching change, he said Ford is less rigid than Hart and open to change.
“Coach Hart has been doing it so long that he’s like, ‘This is what it is and this is what we’re going to do.’ ” Williamson said. “Times have changed. A lot has changed about the race and the people on the track. You can’t just do what you did the last 35 and 40 years.”
Added Minor: “The difference is coach Ford is a lot younger and I think he can kind of relate better to Jeremy and Jeremy can be more comfortable sharing his thoughts and everything with coach Ford.”

I’m not agreeing or disagreeing….just thought it would make interesting food for thought and forum discussion. In 1968, Lee Evans was the 400m Olympic Champ with a winning time of 43.86.
Discuss entry