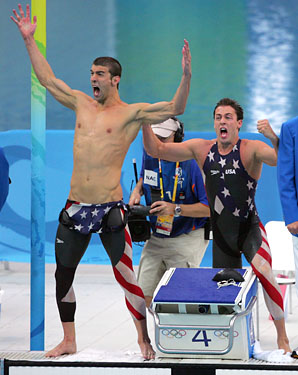 Gymnastics, swimming, and track and field are the poster sports for the Olympics. They toil for 3.9 years in almost total anonymity to the general (American) public and then BAM…they are passionately followed by everyone. As a track nut, this is one of the many reasons why I feel I can relate to and more thoroughly enjoy watching swimming and gymnastics. The human highlight of the swimming program is American Michael Phelps, who as of this writing has won 2 Olympic Golds in Beijing and is on a quest to break Mark Spitz’s record of 7 gold medals in one Games and to break the all-time record of track’s Ray Ewry who won a whopping 10 career gold medals. Over the course of the first 2 days of the games I’ve repeatedly heard that Phelps has the chance to be the greatest Olympian of all-time and other similar titles if he is to win his 8 gold medals.

With all due respect to Michael Phelps (because he’s undoubtedly an unbelievable talent and incredibly hard worker), I don’t think using medal count across sports is a fair means to assess greatness as an Olympian. For all their similarities (quantitatively assessed, individually based, cyclic motions, etc), their are some key differences that make the sports two COMPLETELY different animals. Here’s a few: 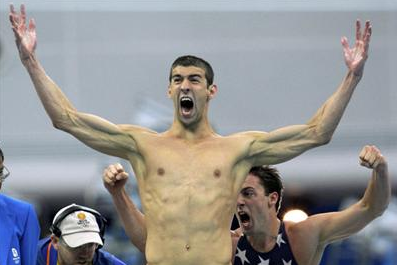 Does this take anything away from Phelps? Hell No! The guy certainly goes in to the pantheon of Greatest Olympians whether he wins his 8 medals or not. The point I’m trying to make is that it’s unfair to sports like track to compare greatness when it just simply isn’t possible to do what Phelps is doing.
Discuss entry

What Can You Do?