If you’ve been watching the Olympics, you’ve probably seen what appears to be gratuitous use of colored athletic tape all over the place. It’s everywhere. I’ve seen athletes in sports as varied as gymnastics, diving, and track wearing the colorful tape. It’s not a fashion statement and it’s not your dad’s athletic tape. It’s what’s called kinesiotaping. It’s a form of therapeutic aid that has it’s roots in aiding the disabled and neurologically impaired. In fact, it was developed more than 25 years ago by a Japanese chiropractor and only came to the States about a decade ago.

My first exposure to kinesiotape was about 6 years ago when I was at LSU. One of our decathletes was having some hamstring problems that weren’t clearing up with the normal high level therapy so one of the doctors on staff used kinesiotape on his leg. The results were mixed. Then only a year later, the same doctor used a similar configuration of kinesiotape as seen on Kerri Walsh on my wife’s newly reconstructed shoulder . Again, the results were mixed, but even my wife says this is no indictment on the tape but likely more so on the extent of her injury. 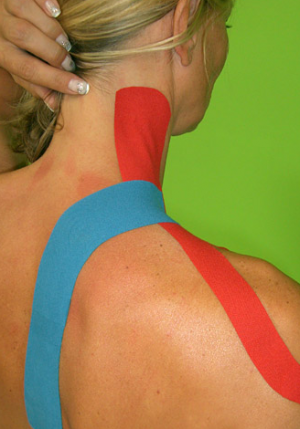 By this point you’re probably wondering what it does and what makes it any different than regular athletic tape. Well, first of all, the tape itself is kinda special. While the tape has no medicinal properties, it’s tensile strength is significantly higher and it has higher elastic properties than traditional athletic tape. As might be expected, this comes at a cost. It’s considerably more expensive than traditional athletic tape at around $15 a roll. Kinda expensive but for those athlete’s who’ve found success with it, the money is well spent. The other thing you’ll notice that’s different is the placement of the tape. Unlike traditional athletic tape jobs, kinesiotape is strategically placed to help assist in the joints action or treat a joint dysfunction. According to proponents, it can be used to provide support, relieve pain, improve circulation, reduce inflammation, relax or assist overstressed muscles, and correct dysfunctional muscle and joint actions.

Unlike more rigid braces, kinesiotaping does not limit range of motion. And unlike traditional tape jobs, it isn’t compressive or constrictive- 2 things which can limit circulation and lymph flow and consequently impair function both acutely and long term (if healing is impaired). Kinesiotaping can be used on major muscle groups and smaller joints alike to treat such issues as carpal tunnel syndrome, plantar fascitiis, and rotator cuff injuries.

So far, I’m not aware of much research on its efficacy but I have seen it be quite helpful to several athletes. Is that a placebo affect? I can’t say. From a purely mechanical standpoint, the concept of some pieces of tape being able to provide the stated benefits appears to be somewhat doubtful BUT the same might be said for the power-transfer technology seen in many of the spandex tights worn by today’s top athletes and research has actually shown these to be effective at meeting their claims.
Discuss entry