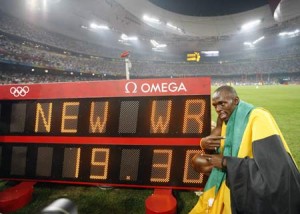 Ok. I’ve got a little bit of info back from Beijing on Usain’s unbelievable 200m. It’s not enough to do the type of review on the race that I did on his 100m WR but it should provide some interesting fodder nonetheless. Apparently, Bolt’s splits were 9.96 and 9.34 for each 100m segment. Compare this to Michael Johnson’s 10.12 and 9.20 seconds for his 19.32 in Atlanta. The faster start by Usain and the faster finish by MJ is somewhat to be expected given that Usain is clearly a 100/200 runner and MJ was the greatest 200/400 runner in history. It’s also interesting to note that Bolt took 42 steps in his first 100m and 38 in the second 100m. The 42 steps is actually quite amazing when you consider that he took 41 steps in his WR 9.69 100m race. That means two things:

The 38 steps is obviously less because despite being fatigued, Bolt (and any other 200m runner) enters the second half of the race with a flying start. This means he doesn’t have to accelerate from a standstill where the stride lengths are the shortest at any point of the race. As a result, he takes fewer strides. It would be really interesting to see how many strides he took in the middle 100m (from 50m-150m). This would be the point in the race when the fatigue effect would be minimal and he’d be coming in to the zone with a flying start. I’d guess that he probably only took 35 or 36 strides during that middle 100m. If correct, that’s about 9 feet per stride. WOW.

Well, that’s it for now. If I get any more information on this race, I’ll be sure to pass it on.
Discuss entry