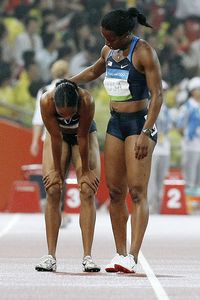 Yesterday, I blogged about America’s track performance in Beijing and whether it was really as bad as it seemed. I kinda steered towards an optimistic view yesterday. Today, I’m back to give the other side of the argument. The answer to whether Beijing was a complete meltdown isn’t real simple but I think it’s safe to say that something wasn’t wright in Beijing. First off, America has historically been very competitive in the jumps. In Beijing we had nothing except for Jen’s silver medal performance in the pole vault. Where are you Carl Lewis? Mike Conley? JJK? Dwight Phillips? Bob Beamon? And in the sprints- chuh. The U.S. men and women took home as many sprint medals in the 100m and 4×100 as Tuvalu. Barring the 1980 Games where we boycotted, the U.S. has never gone 0-fer in these races. And the relay performances…I’m getting chest pains just thinking about it. These are the events that should be our bread and butter. The events where our combination of talent pool, sport science, medical care, nutrition, and coaching are second to none in the world. To have only one medalist in the jumps and NONE in the short sprints or 4x100m is atrocious.

Now let’s take a more quantitative look. Check out the table below. In it you’ll find our most recent medal counts at the past 4 major championships. The second row represents a breakdown by color of the medals we won; the third row is our total number of medals won, and the fourth row is a cockeyed attempt to qualitatively assess our performances at those meets by assigning point values to each color medal (3 pts for gold, 2 for silver, and 1 for bronze).

One of the first things you notice is that Beijing was bad. Bad in almost every way. We had the lowest number of golds, the lowest total number of total medals and by far the lowest point total of any championship in recent history. Sure, there were many times when Lauren William’s Voodoo doll statement sounded appropriate…Tyson getting hurt, Adam Nelson getting hurt, Deena’s broken foot, bad conditions for 4 x 100m relay running that caused 1/3rd of all teams competing to DNF or DQ in the semis. These surely affected our medal, count but these types of things happen to every team at every championship (although I’ll admit it was very bad in Beijing). These voodoo curses alone don’t account for our performance meltdown though. It seemed we got off to a poor start and it affected the morale of the entire team. That’s not something to be ignored as the psychosomatic effects of feeling confident and ready are immense. So what to do to remedy this before 2009 World Championships in Berlin?

USATF has some very good plans in place. I can personally attest to this. In many cases I really think they just need some tweaking, a little less politics, and a lot more selfless commitment to excellence.
Discuss entry