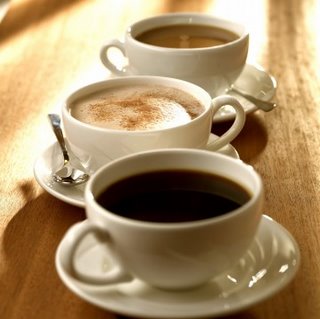 Here’s two new abstracts from the latest edition of MSSE. The first one in particular is new news because to the best of my knowledge it’s one of the first looking at the effects on sprint running (sprint cycling has been examined quite a bit). The results aren’t really unexpected but it’s always nice to see our assumptions backed up by some hard evidence. Thanks go out to Jason for sending these my way.

Conclusion: Although the effect of recovery duration on caffeine-induced responses to multiple sprint work requires further investigation, the results of the present study show that caffeine has ergogenic properties with the potential to benefit performance in both single and multiple sprint sports.

Abstract:
Caffeine is thought to act as a central stimulant and to have effects on physical, cognitive, and psychomotor functioning.

Purpose: To examine the effects of ingesting a performance bar, containing caffeine, before and during cycling exercise on physical and cognitive performance.

Methods: Twenty-four well-trained cyclists consumed the products [a performance bar containing 45 g of carbohydrate and 100 mg of caffeine (CAF), an isocaloric noncaffeine performance bar (CHO), or 300 mL of placebo beverage (BEV)] immediately before performing a 2.5-h exercise at 60% V[spacing dot above]O2max followed by a time to exhaustion trial (T2EX) at 75% V[spacing dot above]O2max. Additional products were taken after 55 and 115 min of exercise. Cognitive function measures (computerized Stroop and Rapid Visual Information Processing tests) were performed before exercise and while cycling after 70 and 140 min of exercise and again 5 min after completing the T2EX ride.

Results: Participants were significantly faster after CAF when compared with CHO on both the computerized complex information processing tests, particularly after 140 min and after the T2EX ride (P < 0.001). On the BEV trial, performance was significantly slower than after both other treatments (P < 0.0001). There were no speed-accuracy tradeoffs (P > 0.10). T2EX was longer after CAF consumption compared with both CHO and BEV trials (P < 0.05), and T2EX was longer after CHO than after BEV (P < 0.05). No differences were found in the ratings of perceived exertion, mean heart rate, and relative exercise intensity (% V[spacing dot above]O2max; P > 0.05).

Conclusion: Caffeine in a performance bar can significantly improve endurance performance and complex cognitive ability during and after exercise. These effects may be salient for sports performance in which concentration plays a major role.

What Allowed Tom Brady to Play NFL Until He Was 44

How to Reduce Sugar Intake by David Dack

5 Ways To Boost Your Mental and Physical Health