This article resonated with me. I was especially interested in the comments of Andy Higgins and Doug Clement, two coaches that I really respect. I think this article summarizes the all the issues in a very succinct and concise manner.

Perhaps it’s just fatigue after a rash of doping positives in the years since. Or innocence lost after Johnson’s dramatic fall from grace.

“I’m not sure there has been an athlete so identified around the world with such glamour- before the positive test,” Canadian track coach Andy Higgins said.

That made the plunge all the more momentous.

Now, Jamaican sprinter Usain Bolt could not rouse a crowd at the 2008 Beijing Olympics without a spectre of doubt hanging over the finish line.

Was he really clean? Could anybody so dominant- gold medals in both the men’s 100- and 200-metre events, plus the 4×100 relay- really have run like that without chemical help?

It is Johnson’s enduring legacy.

“I hate it,” Higgins said. “I’m essentially, by nature, an optimist. I have a positive view. … I am seriously pissed off because [tainted coaches and athletes] have made me to a degree a cynic.” 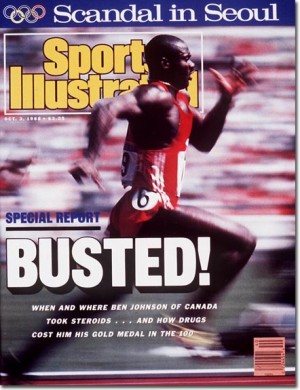 Higgins watched Bolt drop his arms 20 metres from the finish line during the 100-metre final in Beijing and still run 9.69 seconds.”He’s an immense talent. No discussion,” Higgins said. “He’s 6-foot-5 and he comes out of the blocks like he’s 5-foot-6. He doesn’t get left in the blocks. Then, he runs away from them with that immense stride length and power. And he’s completely innocent of whatever can create pressure.

“But all I have are questions.”

The questions surrounding Bolt “are a sad outcome” of the Johnson legacy, said Bruce Kidd, dean of the faculty of physical education and health at the University of Toronto.

“I like to give people the benefit of the doubt. I was electrified by his performance. But it is true that the prevalence of drugs in all aspects of society makes this a question in people’s minds.”

Charlie Francis, the architect of Johnson’s drug-supported training regime, said last week he believes drugs weren’t the reason Bolt ran world-record times in Beijing. Rather, it is the Jamaican practice of training on grass surfaces, which is easier on joints and affects the connective tissue in a positive way.

“Now, it’s not my job to speculate who is doing what,” Francis said. “I’m sufficiently satisfied that the playing field is level, enough to enjoy watching races at the highest level.”

Does that mean Francis, once known as Charlie the Chemist, thinks sprinters are clean now? Or that no athlete is lacking of chemical assistance? What does it mean to be on a level playing field now?

Francis said during the federally ordered Dubin inquiry into doping that Johnson had to take steroids to remain on a level playing field with the rest of the athletes. And six of the eight Seoul 100-metre finalists were eventually pegged with drug infractions of some sort, causing experts to call it “the dirtiest race in history.”

“Sick. Shallow,” Higgins said of the drive to get onto “a level playing field.”

Higgins was the only Canadian track coach to show up outside the athletes village in Seoul wearing the team uniform the morning after Johnson’s positive test. The rest of them didn’t want to deal with the media.

He told the media that Johnson’s positive test wasn’t a sport issue, but a values issue. Athletes should be directed to learn solid values, Higgins said, so the effort to be your best holds the most meaning and that solid values serve you for the rest of your life.

Johnson didn’t learn those values in the race to win at all costs, Higgins said, and he sees Johnson’s story as a tragedy.

“He was a young man who was used by a very smart man [Francis] for his own ego purposes, and he’d been taken advantage of,” Higgins said. “That should never have happened.”

One of the resulting tragedies of the Dubin inquiry is that people see Johnson as the bad guy and Francis as the good guy for revealing truths about the drug culture in track, Higgins said. In his mind, however, Francis deserves to be held responsible.

In the end, Johnson has come through with questionable values, like the cult of celebrity. “He has nowhere to go,” Higgins said.

He said Johnson’s demise has affected sport twofold in the two decades since:

*It has cost the sport in Canada immensely in terms of financial support and limited the opportunities for track athletes that followed.

*It has cost the sport credibility and turned people into cynics.

But it wasn’t just Johnson’s positive test that caused it, Higgins said. It was the ensuing Dubin inquiry, which featured Francis’s revelations.

“Charles Dubin became fascinated by Charlie’s bright mind,” Higgins said. “And the man is very bright. He has strong opinions, tons of them related to justifying what he did. And that kept getting aired. It was an amazing public seminar on doping. … It gave Charlie a forum.”

After the hearings, the doping hotlines in Canada and the United States lit up, with athletes asking for confirmation of what they had heard- so they could use the information for themselves.

“It added to the justification in a lot of people’s minds that the only way to the top was to take drugs,” Higgins said. “It missed the entire point, which was … that it was cheating.”

Only he and fellow coach Doug Clement used the word “cheating” in their testimonies, Higgins said. “It didn’t get clearly defined, because the justifiers have all kinds of other words.”

He says he has not seen a huge positive impact from the Dubin inquiry in Canada. The World Anti-Doping Agency wasn’t born for another 10 years, until after the Festina cycling scandal, when a manager was found with large quantities of doping products in a team car on the France-Belgium border.

Kidd thinks that, with the efforts of WADA, drug use is less prevalent today in sport, although during the years after the Johnson positive, other countries were “just sweeping doping under the carpet.” Now, he says, there is a very strong worldwide consensus that doping is “antithetical to the value of sport and should be strongly policed.”

Higgins is not so sure track and field is as tough as it should be on the doping issue.

“There’s too much money to be made on world records,” he said.

He questions the move by the governing International Association of Athletics Federations on tagging seven female middle-distance runners with doping infractions just before the Beijing Games, to send a message to any Olympic competitor considering cheating.

But why not target sprinters, who are the major marketing attraction at any event?

“Would it be smart for a huge sport to go in and create a scandal, and destroy illusions one more time?” he pointed out.

In the 20 years after Seoul, it’s become clear not all infractions were made public.

Former Canadian high-jumper Milt Ottey says Johnson was used “as a scapegoat” for a dirty track scene “and the IAAF knew it at the time.”

“My suspicion was that a lot of Americans were caught but that was squashed,” Ottey said. “[The IAAF] had a chance to make a real statement, but they let it be believed it was a single event … it was Ben. Now, anyone who does anything great is suspected. That’s sad.”

Asked if anything has changed, Ottey says people are now more tolerant of performance enhancement. “I think the public is more understanding of the Ben Johnson incident, though, and they think it’s time to forget and go on.”

Angella Issajenko, Canada’s fastest female sprinter who never tested positive but admitted to drug use at the Dubin inquiry, has always said Johnson’s treatment following the doping scandal was unfair.

“He didn’t sodomize somebody’s child, come on, he took … stanazolol a few days a week; big deal,” she said.

Kidd said sport never had innocence, embedded in society as a whole.

“Sport is always thought to create a high moral standard,” he said, adding Johnson’s positive test was a reminder that it didn’t.

Higgins said Johnson blasted an illusion of innocence. In reality, coaches and athletes knew about rampant doping in the days and years before the infamous test result.

“You knew that the Eastern Bloc was into it,” he said. “You knew what you were competing against.”

Now, Higgins says, there are more than a few people performing at the highest levels that are starting “to get very nervous,” but what remains of the former Eastern Bloc hasn’t changed. However, he still sees too many suspicious things.

“The human physiology just cannot do the work needed to perform at the highest levels and stay there week after week through an unbelievably long season,” he said. “It’s not possible.”

Sadly, the Ben Johnson-born cynicism is just one more aspect of a huge all-pervasive cynicism about almost anything, Higgins says.
Discuss entry

Three Thoughts on Phyllis Francis and her 400 Indoor Record

How fast can Usain Bolt run the 40 yard dash?