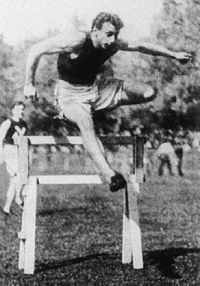 Alvin Kraenzlein is one of the pivotal figures in the development of track and field. Historians of the sport recognize him as the father of straight-lead-leg hurdling (in which the first leg over the hurdle is kept straight and parallel to the ground). Hurdlers continue to employ this technique, which permits the athlete to clear the barriers without breaking stride. Although Arthur C. M. Croome of Great Britain first attempted the straight-lead-leg style in 1886, Kraenzlein perfected the technique. The style probably came naturally to him because of his sprinting and long-jumping skills. Kraenzlein in the 1900 Olympic Games won gold medals in four individual events, a feat that has never been equaled. (While Jesse Owens in 1936 and Carl Lewis in 1984 collected four gold medals apiece, one of each man’s medals came in a relay event.)

Kraenzlein was born in Milwaukee, the son of Augusta and John G. Kraenzlein, a brewer. He demonstrated all-around track-and-field skill during his senior year at Milwaukee’s East Side High School in 1895. In a meet against crosstown rival West Side High School, Kraenzlein won the 100- and 220-yard dashes, 120-yard high hurdles, 220-yard low hurdles, high jump, long jump, and shot put. In the Wisconsin Interscholastic Championships that year, he nearly duplicated that performance, capturing first places in the 100-yard dash, 120-yard high hurdles, 220-yard low hurdles, high jump, and shot put.

Kraenzlein left Wisconsin for the University of Pennsylvania in 1898, where he came under the tutelage of Michael Murphy, the nation’s leading track-and-field coach, and developed into the world’s leading hurdler. After establishing an indoor world record of 6.0 seconds for the 50-yard high hurdles in 1898, he captured both the 120-yard high hurdles and 220-yard low hurdles at the AAU Championships in 1898 and 1899 and at the Intercollegiate American Amateur Athletic Association (IC4A) Championships in 1898, 1899, and 1900. His 1898 AAU victory in the 120-yard high hurdles resulted in a world record of 15.2 seconds, and his IC4A triumph in the 220-yard low hurdles that year produced a world record of 23.6 seconds, a time that stood as the global standard for nearly twenty-five years. Kraenzlein also succeeded in the long jump, establishing a world record of 24′ 3 1/2 in 1899. He won the long jump in both the AAU and IC4A Championships, improving the world record by one inch in the latter. Moreover, he won the AAU and IC4A 100-yard dash titles in 1899 and 1900, respectively. As captain of the Penn track-and-field team in 1900, he scored a record 18 points in the IC4A Championship, leading Penn to its fourth consecutive team title.Olympic Champion

In 1900 Penn’s championship track-and-field team was one of several college teams that represented the United States in the Olympic Games at Paris. Before arriving in Paris, Penn competed in the British Amateur Athletic Association (BAAA) Championships in London. Kraenzlein captured BAAA titles in the 120-yard high hurdles and the long jump. His winning time in the hurdles of 15.4 seconds marked a world record for grass tracks. At the Olympic Games Kraenzlein won his four gold medals in the 60-meter dash (7.0 seconds), 110-meter high hurdles (15.4 seconds), 200-meter low hurdles (25.4 seconds), and the long jump (23′ 6 3/4). His winning performances in each event established new Olympic records.Coaching Career

After the 1900 Olympic Games Kraenzlein retired from athletic competition. Having graduated from the University of Pennsylvania with a degree in dentistry that year, he returned to Milwaukee and established a practice. Kraenzlein also managed the Milwaukee Athletic Association. He returned to Philadelphia in 1902 to wed Claudine Gilman, whom he had met at the University of Pennsylvania. Kraenzlein continued to practice dentistry in Philadelphia until 1906, when he became the track-and-field coach at Mercersburg Academy. In 1910 he became an assistant professor of physical training and track-and-field coach at the University of Michigan. Among the athletes he mentored at Michigan, the most notable was Ralph Craig, who captured Olympic titles in both the 100 and 200 meters in 1912. In 1913 the German imperial government signed Kraenzlein to a five-year, $50,000 contract to prepare the German Olympic team for the 1916 Olympic Games, scheduled to be held in Berlin. However, the outbreak of World War I canceled the German games. Kraenzlein returned to the United States and served in the army as a physical training specialist. After the war he worked as an assistant track-and-field coach at Penn. Kraenzlein’s final years were spent coaching young boys at various summer camps and the trackmen of the Havana (Cuba) Golf and Tennis Club in the winter. In late 1927 he suffered from pleurisy and died early in 1928 from endocarditis.

Commentary: My interest in sports history is to ensure that we learn from the past so we can be smart about the future. While I like to think I am innovative, I realize that other people were perhaps before me thinking of the same problems that arise in training. What concerns me is that today we have a disrespect of history of training and a currently a weakness in training models and program design. Instead of a merging of new concepts with old ones, we tear down old buildings and start from scratch. Sometimes this works, sometimes it fails. I will talk about more history and how it relates to today’s advancements in an article about Veteran’s day as it’s still on my mind. Right now the comments of Steve McGill about the future of seven steps is a very important decision future hurdlers and coaches will have to think about. Will seven steps be the dolphin kick of high hurdling, where everyone is doing it or will it continue to be a rarity? I have had athletes ask my opinion and I have decided that I will look at both and not eliminate the option with hurdlers that are in development because it makes me feel uncomfortable doing something different.
Discuss entry